I Am Not A Sailor

NikeWRITTEN BY OTHER PIRATES2 Comments 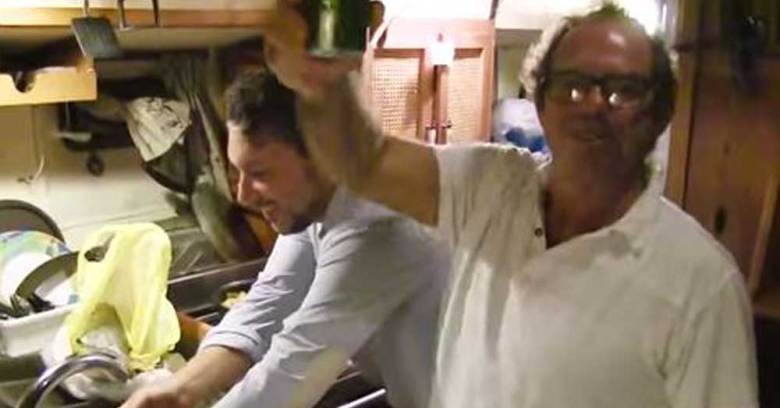 I should keep this short. I will.

In 2010 I was 53 years old. In Portugal the crisis seemed to have settled in for good. I had spent the previous year and a half working on what was supposed to be “the project of my life”, like you would say of the woman

of your life, or the dream of your life. It failed – you can fight a whole array of things, but you cannot fight things. Things are what they are, not what you want them to be, and never remotely what you think they should be.

So in October 2010, a few days after I turned 53, I took an airplane bound for Brazil. I had been hired to take a 43 foot catamaran that had just been built and bring her to Portugal. I remember little of that flight, they are all the same, anyway.

The plane stopped in the Cape Verde Islands. At Sal airport there was this gorgeous girl wearing a badge that said “temporary”. I, for one, was not sure whether this was a threat or a promise; nor were half the males on the plane who decided to have a drink at the airport bar. They stared at the girl the way I’d stared at the stars when I was in the merchant navy and had to catch them with my sextant to know where I was: beautiful, but out of reach.

That’s the only thing I remember. I landed in Fortaleza, where I met a girl at the beach. She was not as beautiful, but she was far more accessible than the “temporary” one. She was also much more temporary.

The boat I was supposed to deliver was in Parnaiba, not Fortaleza.

In March 2012 my not-so temporary girlfriend decided to break up with me. I was lost: for the first time in a long time it was not me who had decided what “temporary” meant.

I was hired to go to San Francisco and take a 44 foot monohull (in sailors’ talk, the type of boat is always preceded by a figure; for us, size matters) from there to Costa Rica where it would be used to launch a charter company.

The passage from San Francisco to Costa Rica was one of the best of my life. We saw whales, dolphins, sea life every single day. We stopped in Guadeloupe, an island off the Mexican coast that seemed as if  a piece of the moon had detached itself and fallen into the Pacific and had decided to stay there for want of a plausible reason to move any further. We stopped in other places in Mexico, in Salvador and in Nicaragua. I had a marvelous crew. I was as happy as a man can be when permanent turns to temporary against his will.

Costa Rica is a beautiful, stunning country. But it isn’t the most suitable place for setting up a sail-boat charter company. Just as a beautiful woman may not be suitable for a lot of things: beauty is only part of the picture, not the whole picture – in a country as in a woman.

The owner’s decision was to go to Panama and start the charter company somewhere there.

This is how I eventually met Nike. She was in Panama, in a place called Shelter Bay, right where you enter the Panama Canal from the Caribbean  Sea.

Shelter Bay is a jungle marina in the middle of nowhere. The nearest city is Colón, one of the lousiest places I have ever been to. That’s no recent accolade – if you read books about the building of the Panama Canal you will discover that Colón was already reckoned the lousiest place on a continent that had no shortage of lousy cities. At night, all you hear is the roncadores – monkeys that howl like they want to kill everyone on the entire planet, not only the poor creatures that have the misfortune to inhabit their patch of jungle.

One day I went to town and I bought a box of Cuban cigars. I didn’t want to. But the guy who was selling it insisted and lowered the price to the point at which I couldn’t but say yes.

The cigars were sublime. That’s why I didn’t want to buy them in first place: I wouldn’t be able to smoke them all before they would spoil. I had no way to keep them away from the heat (humidity in Shelter Bay was no big problem; sure, it was too high, but better that than too dry).

The price I paid was 60 dollars. It’s impossible to say no when you think that that a box of cigars would cost you at least 250 dollars in Panama City; say 350 euros in Lisbon, and maybe 400 euros in London or Paris.

There were 25 of them in the box. I calculated that even if I ended up smoking only half of them in perfect condition, it would have been a good deal.

The question was – what to do with the other half?

I gave them away. I gave them to anyone whose path crossed mine (provided, at first sight, he – and there were only men – looked like someone who deserved a perfect, smooth, Vega Rubaina Churchill cigar, fresh and smooth and smelling like a woman in love).

At the bar of the Marina there was a girl I had already noticed. She was much too beautiful to be alone. She was talking to the manager, a guy I appreciated and to whom, consequently, I offered a cigar.

Then, on an impulse – pure and simple – I offered a cigar to the girl. I thought she would accept it and give it to her boyfriend.

I do not remember if she accepted the cigar or not. But I promised to keep this story short. I will. Her boyfriend was not in Shelter Bay.

Sometime later I invited her to have dinner onboard the sloop I had brought from San Francisco. It turned out she did not have a stove on her boat. It turned out she had a friend arriving that night. It turned out that we decided to have dinner every evening on board the A. F. (sorry, I usually keep the names of boats I work on anonymous, unless there’s a good reasons not to). It also turned out that those dinners were some of the best moments of my life, all periods and events and dinners and meetings and conversations and you-name-it considered.

Eventually I left for another place in Panama, an archipelago called Bocas del Toro. S/Y1 KARL and Nike were supposed to come along, too. KARL never made it to Bocas, but Nike did, on board the A. F. By then, I was then the skipper of the HELENA S., a 50 foot catamaran named after my daughter. Our dinners went on. Nike, the crew and I talked a lot about a lot of things. One day we were talking about what being a sailor is. “I am not a sailor”, she told me.

I was back in Shelter Bay, from Bocas. I had no money, no boat, no life to speak of. I was not adrift, mind you. Neither was I lost. I was almost back on my feet. I just had no money (90 dollars is no money wherever you are. In Shelter Bay it’s even less than no money. It is as close to nothing as you can get).

Nike gave me shelter. I found a job the day I arrived. A few days later I found a boat to sleep on. KARL was on the hard2. I was on the hard also, but mine was a different hardship. In contrast to KARL’s my hardship diminished daily: I was working and being paid and enjoying every minute of every day.

Which invariably ended with a dinner on board KARL and, one evening, with Nike and me talking about being, or not being, a sailor.

I am a sailor. The way a drunkard is a drunkard even if he does not drink anymore. I am a sailor. That is what defines me, what drives how I react to things, what explains my life – a big chunk of which I’ve spent out of the water –,  what structures my mind.

I am a sailor because I cannot be anything else. It is not exactly a prowess. It is just the way things – my things – are.

Nike told me “I am not a sailor. I happen to be on a boat now, but in three years’ time I’ll be in the USA raising horses or in Ireland running a hostel”.

This wasn’t true (I mean her not being a sailor. Not eventually going to Ireland, the USA or Finland to dress elks. She probably will).

Being a sailor is not a compliment. It is not as easy to define as being an engineer, a dentist or even an artist. Men have been to sea for millennia and not one – not even Joshua Slocum, or Joseph Conrad, two of the greatest sailors and writers of all times – have been able to define what a sailor is.

Being a sailor is an as yet undefined state of mind. It is a mixture of stubbornness and letting go, knowing when to not let go anymore, and knowing that you are nothing and you are everything and that the nothingness in you is as powerful and strong as the everything that surrounds you, and that the sea and boats and life and things are more powerful than you are and yet can’t win over your sheer, pure, clear will and not letting that knowledge take you over and become hubris. The sea does not like hubris and can recognize it as soon as it sees it and a sailor knows that he has to steer as far away from it as from fear – and yet he will win, because a sailor is a sailor, a form of life concentrated, reduced to the essentials, to the very bone of life.

I cannot define what a sailor is, but I recognize one when I see one. Nike is a sailor.

I am grateful to my life because it gave me the opportunity to meet her. And – much more than this – to become a not temporary friend of hers.

Thanks a lot to Luís, for writing this wonderful blog post! You can find out more about Luís and his thoughts about life on his blog Don Vivo.